Light-emitting diodes (LED) are becoming a valid alternative to Hg lamps in most radiation-curable applications. Matching photoinitiator absorbance with the operation wavelength of the LED source is crucial.

In this paper, we will describe how it is possible to modify the physical-chemical properties of 3-ketocoumarins and how such modifications influence reactivity. We will be able to design new 3-ketocoumarins with good solubility, high reactivity and low yellowing for clear and pigmented coatings. These new molecules always were compared to thioxanthones and acylphosphine oxides, which are the only two classes of photoinitiators that show good performance at 365 nm and 395 nm1 (most powerful operation wavelength for LED).

Among the light radiation sources used in UV curing, light-emitting diodes (LED) have been the subject of significant development over the past few years because of the advantages of low temperature operation, extremely long life, instant start and low energy consumption as compared to conventional medium-pressure mercury lamps. Unfortunately, while these lamps provide a series of line outputs that cover the UV spectrum, commercial LED lamp output is a single peak, centered at 365 nm or 395 nm (most powerful), with a very narrow bandwidth. Therefore, formulating for LED lamps requires photoinitiators that absorb most efficiently in the range of 365 nm and 395 nm, since these are the only outputs of most of LED lamps.

Up to now the photoinitiators most commonly used in this field belong to the classes of thioxanthones (ITX) and acylphosphine oxides (TPO, BAPO).

Unfortunately, thioxanthone derivatives, commonly used as sensitizers and photoinitiators, are prone to yellowing upon exposure, and this strongly limits the use of such derivatives in all the applications for which color stability is mandatory, e.g. graphic arts.

Acyl phosphine oxide photoinitiators, on the other hand, when air-cured, are very sensitive to oxygen inhibition and do not give surface cure, leaving a tacky surface.

Therefore, demand is increasing for the development of different photoinitiators with absorption in the 360 nm to 400 nm region, good photochemical activity, and low oxygen sensitivity and yellowing. In this paper, we describe how to modify the photophysical properties of 3-ketocoumarins to create a new class of photoinitiators for LED lamps.

Synthesis. The 3-ketocoumarin derivatives are easily prepared by the condensation of salicylaldehyde derivatives with β-ketoesters.2

The substituents R1, R2 and R3 in Table 1 can be widely varied. Several derivatives have been prepared as reported in Table 1.

Absorption Spectra. As shown in Figure 1, the ketocoumarins have absorption maxima ranging from 340 nm and 450 nm in acetonitrile, and the ε value at 395 nm is enhanced when an electron-donating group is on the phenyl ring or coumarin ring. The highest values are reached with the amine substitution on the coumarin nucleous (Table 1).

UV-LED Curing Tests. The first test for the evaluation of the new 3-ketocoumarin reactivity was performed by the measure of the double-bond conversion (1407 and 810 cm-1) by FT-IR in a clear coating.

The photopolymerizable compositions for the test were prepared by dissolving the photoinitiator and the co-initiator (Ethyl-4-dimethylamino benzoate, EDB) at a concentration of 3% by weight each in a mixture 99.5:0.5 wt of bisphenol A epoxy diacrylate and silicone diacrylate. The LED source used was an LX400+ system equipped with a UV LED spot centered at 400nm (Excelitas).

When measuring the activity of these molecules in a cyan ink for inkjet printing, the concentration of the photoinitiator and the co-initiator was 5% each by weight. The best performances are shown in Figure 3.

Figures 2 and 3 clearly show that ketocoumarins containing medium-strength electron-donating groups (such as O, S) are good candidates for working with LED at 395 nm. The same result is reached using an LED 365 nm lamp.

At 395 nm, LFC3226 and LFC3260 show reactivity much higher than ITX at both concentrations, while LFC3220 shows a reactivity similar to TPO (Figure 4). Despite the good reactivity, LFC3226, the alkylthio derivative, was rejected because of yellowing (Figures 6 and 7).

At 365 nm, LFC3260 is the best performer (Figure 5). It shows a reactivity twice that of ITX. LFC3220 also shows good reactivity but is significantly lower than that of LFC3260.

Yellowing. The color stability of LFC3260 and LFC3226 also was evaluated in clear ink for inkjet printing by a color guide BYK 45/0. The results are summarized in Figure 6.

Both ketocoumarins show a yellowing higher than that of TPO, but while LFC3226 is also more yellow than ITX, LFC3260 shows lower values in all measurements.

An acrylated amine as co-initiator also was evaluated (Figure 7), and the b* value of LFC3260 was significantly reduced as compared to LFC3226 and ITX.

Sensitization. To complete the characterization of the new ketocoumarins, the ability of LFC3260 and LFC3220 as sensitizers for an aminoketone (2-Methyl-1-[4-(methylthio)phenyl]-2-morpholinopropan-1-one, MPMP) was evaluated.

The test was performed by FT-IR in a clear formulation (bisphenol A epoxy diacrylate/silicone diacrylate 99,5:0,5 by weight), with a concentration of PI at 4% and sensitizer at 0,5 by weight. An LX400+ system equipped with a UV LED spot centered at 400 nm (Excelitas) was used as light source (Figure 8).

These data, even if in clear coating, seem to indicate a quite good activity of LFC3260 as sensitizer.

In conclusion, we were able to tune the absorption wavelength of the 3-ketocoumarins to balance absorption, reactivity and yellowing. The 3-ketocoumarin that showed best results is LFC3260, which is strongly reactive in all tests. In fact, it shows a reactivity twice that of ITX in through-cure measurements at 395 nm and 365 nm and significantly less yellowing.

Synthesis. The 3-ketocoumarins in Table 1 were synthesized as described in Scheme 1. The general procedure is as follows: To a solution of 2,75 mmol of aldehyde 2 and 2,75 mmol of ß-ketoester 3 in 15 ml of ethanol were added 0,5 ml of piperidine. After three hours under reflux, the reaction mixture was cooled down, and the reaction product 1 crystallized at room temperature. The solid was recovered by filtration (yield of 70 to 90%).

Polymerization. FT-IR experiments. The photopolymerizable compositions for the tests were prepared dissolving the photoinitiator and the co-initiator at 40°C. Films with uniform-layer thickness were prepared by applying the formulation on a polyethylene foil with a K101 control coater (bar No. 1 for clear coating and No. 2 for cyan inkjet ink).

The film was placed in the sample lodgment of an FT-IR (FT-IR 430-Jasco) and was exposed to a 400 nm LED (powered by an external OmniCure LX400+ power source) located at a distance of 65 mm from the sample and at an angle of 30°. IR spectra were acquired at constant time intervals during the photopolymerization, and the reduction over the time of the area of the peaks at 1408 and 810 cm-1 assigned to the acrylic double-bond was determined using the IR software. This allows quantifying the degree of polymerization and, therefore, the efficiency of the photoinitiator. If not stated otherwise, the formulation always was freshly prepared.

Through-Cure experiments. The photopolymerizable compositions for the test were prepared by dissolving the photoinitiator and co-initiator at the same concentration by weight in a cyan inkjet ink. The ink was applied at a thickness of 6 microns, by a K101 control coater on a paper support. It was passed under the light source, Phoseon LED 365 nm (12 W/cm2) or Fusion DRSE-120 Q/QNL equipped with a Phoseon RX StarFire MAX UV Light Source 395 nm (4 W/cm2). The photopolymerization rate is measured with the line rate (m/min) at which a complete photopolymerization occurs (through-cure). The photopolymerization is complete when the ink does not show any damage after repeated pressure and twists of the thumb on the surface. The higher the line rate to obtain through-cure, the higher the reactivity of the photoinitiator.

Yellowing. The photopolymerizable compositions for the test were prepared by dissolving the photoinitiator and the co-initiator at a concentration of 3% by weight in a clear inkjet ink. The ink was applied with a thickness of 6 microns, by a K101 control coater on a paper support, then passed twice under the light source [Phoseon LED 395 nm (16 W/cm2)] with a speed of 30 m/min. Yellowing was evaluated by measuring the b* value (yellowness vs. blueness) by a color guide (45/0 BYK). The lower the b* value, the lower the yellowing of the sample. 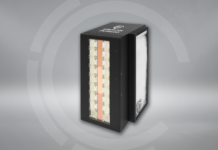 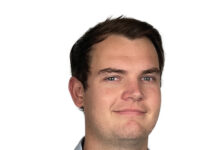