As 2018 began, “Ultra Violet,” Pantone Color of the Year, kicked to the curb last year’s selection, “Greenery.” Even more rapid is the change in seasonal color trends in fashion, home decorating goods and accessories. Such is today’s reality of constant updating.

Fickle consumers seem to want – and are becoming accustomed to – a rapid rate of change and nearly instant gratification, so how can proactive producers meet the demands of a fluctuating market?

What if – after fabrication – a product’s color could be changed before shipment? Or even at the whim of the end consumer?

Stefanie Mueller and her team at the Massachusetts Institute of Technology, Cambridge, are working toward one possible solution: using 3D printing and photochromic ink with UV cure to produce items that can change color…and then change again to adjust to the next color trend.

“With the amount of buying, consuming and wasting that exists,” Mueller explained, “we wanted to figure out a way to update materials in a more efficient way, which was largely the motivation behind this project.”

Mueller tackled the concept with her team at MIT’s Computer Science and Artificial Intelligence Laboratory (CSAIL), a research institute formed when the Laboratory for Computer Science merged with the Artificial Intelligence Laboratory in 2003. As principal investigator and faculty member, she coordinated the project with co-investigator Parinya Punpongsanon, then a postdoctoral associate and currently on the faculty at Osaka University, Suita, Japan; Xin Wen, an undergraduate student who serves as the project’s software implementer; and David S. Kim, who was the material technologist. Their work resulted in an article, “ColorMod: Recoloring 3D Printed Objects using Photochromic Ink,”3 presented in late April at the CHI 2018 Conference on Human Factors in Computing Systems in Montreal, Quebec, Canada.

ColorMod is described as a method to extend an approach from a solitary color change (typically from transparent to colored) to one of multicolor change – red to yellow, for example. The multicolor system is based on the same concept as that of pixels on a screen display: differently colored photochromic materials are placed in a dense pattern on the surface of a 3D-printed object. To recolor the object, the 3D voxels with the selected color are activated while others are deactivated to become transparent.

“These materials can switch their appearance from transparent to colored when exposed to a certain wavelength,” Mueller continued. “The color remains active, even when the object is removed from the light source. The process is fully reversible, allowing users to recolor the object as many times as they want.”

The process begins with a 3D model, which is converted for photochromic 3D printing. The colors are chosen from a menu and processed with ColorMod’s user interface. Conversion splits the model into voxels, assigning a photochromic color to each, and creates files for 3D printing. Objects emerge from the 3D printer already colored and UV cured. At that point, the objects can be changed in color as desired.

The team worked to develop a custom 3D-printable material made from p-type photochromic dyes to maintain color. Their three-part modification system includes a UV source with a digital on/off controller for activation, a visible-light projector for deactivation and a rotating platform controlled with a relay switch for 360-degree projection on the object.

For color activation, the ~355nm UV source activates all the voxels, a process that takes about 68 seconds. Then, to arrive at the desired color, an additional four minutes are required for the visible-light projector to deactivate selected voxels that arent needed for the new color. The platform is rotated four times at 90 degrees for activation on all sides and another four times to deactivate the unneeded voxels. The entire process takes about 23 minutes per item. 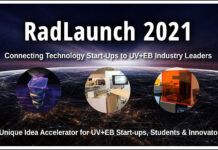