A senior official at the Occupational Safety and Health Administration (OSHA) is downplaying the prospect of significant consultation with the US Environmental Protection Agency (EPA) on chemical risks to workers under the revised toxics law, as some industry groups have sought, calling the extent of such collaboration “hard to predict” and suggesting it often is unnecessary. William Perry, director of OSHA’s Directorate of Standards and Guidance, said OSHA has had discussions with EPA on its efforts to review new and existing chemicals under the revised TSCA, which expressly calls for EPA to consider chemicals’ risks to workers in reviews. He said the worker health and safety agency will provide technical assistance when a chemical poses a significant risk to workers, but EPA can proceed on its own when addressing lower-risk substances. His comments appear to provide the first public response to calls from industry groups for EPA to develop a process for coordinating with OSHA before regulating chemicals’ risks to workers under the revised TSCA. The TSCA New Chemicals Coalition (NCC), which represents 20 chemical companies, urged the agency to craft a process for consulting with OSHA when assessing worker risks under the revised TSCA, and to adopt new regulatory restrictions only when OSHA rules fail to address unreasonable risk.

The newest edition of the US Environmental Protection Agency’s Emissions & Generation Resource Integrated Database (eGRID) is available on the eGRID website: www.epa.gov/energy/emissions-generation-resource-integrated-database-egrid. This edition of eGRID contains year 2016 data on emissions, emission rates, generation, generation mix and power plant attributes to be used when calculating a carbon footprint.

The US Environmental Protection Agency has published frequently asked questions (FAQs) on implementation of the Hazardous Waste Generator Improvements Rule, which have been raised in the course of the agencys training programs and presentations. The FAQs can be found online at www.epa.gov/hwgenerators/frequent-questions-about-implementing-hazardous-waste-generator-improvements-final-rule.

US EPA is proposing a new Toxic Substances Control Act (TSCA) fee rule. The new fees collected by the agency will cover the costs of developing risk evaluations, assessing and collecting information, and reviewing new chemicals. EPA is suggesting an increase from no fee to $4,500 for a Low Volume Exemption (LVE) and from $2,500 to more than $20,000 for a Pre-manufacture Notice (PMN), depending upon company size and sales. Information on the proposed TSCA fee increases can be found at https://www.regulations.gov/document?D=EPA-HQ-OPPT-2016-0401-0015.

On Jan. 25, 2018, the US Environmental Protection Agency rescinded the Clean Air Act’s “Once In, Always In” policy. A memorandum titled “Reclassification of Major Sources as Area Sources Under Section 112 of the Clean Air Act,” rescinds the 1995 memorandum “Potential to Emit for Maximum Available Control Technology (MACT) Standards – Guidance on Timing Issues.” The 1995 memorandum provided that facilities that are major sources of hazardous air pollutants on the first compliance date of the standard are required to comply permanently with the MACT requirements. As a result, a source is required to comply with such emission standards, even if it subsequently reduces emissions below the major source thresholds that originally triggered the standards.

US EPA Adjusts Penalties for Inflation

US EPA has issued final regulations, 83 Fed. Reg. 1190, adjusting the maximum civil penalty dollar amounts for violations of various environmental regulations occurring in 2018. The action is mandated by the Federal Civil Penalties Inflation Adjustment Act Improvements Act of 2015 (2015 Act), which required an adjustment from 2015 penalty maximum levels to account for inflation and included a catch-up provision for inflation.

This year is shaping up to be a banner year for the Sustainable Green Printing Partnership (SGP), as more printers, suppliers and print buyers recognize SGP as the leading certification organization for sustainable print practices. SGP Patrons recognize SGP’s continuing role in advancing the benefits of SGP certification to both the print and buying communities. SGP Patrons are committed to transform the marketplace and leadership for inclusion of sustainable business practices in the industry. RadTech members that have shown their ongoing support include 3M, efi, Flint Group, INX International, MacDermid Graphics Solutions and Sun Chemical. As an SGP Resource Partner, RadTech encourages its members to learn how their companies can become part of the SGP community and support sustainable printing by visiting www.sgppartnership.org.

California Assembly Bill 617 (Garcia) recently was signed into law and purports to provide “a new community-focused action framework to improve air quality and reduce exposure to criteria air pollutants and toxic air contaminants in communities most impacted by air pollution.” The law includes new requirements for accelerated retrofit of pollution controls on industrial sources, increased penalty fees and greater transparency and availability of air quality and emissions data. Although specific details have not been released, new regulatory actions – along with focused enforcement within specific communities – are expected. The program will include incentive funding to provide investments in cleaner technologies. UV/EB processes may be eligible for such funding. The California Air Resources Board (CARB) must develop a list of existing and available measures that community emissions reduction programs must use. CARB must establish the overall direction of the program by Oct. 1, 2018. This includes identifying impacted communities, establishing the criteria for air monitoring and local emission reduction programs and developing statewide strategies for reducing emissions. Once CARB has identified the first round of priority communities, air districts must develop and adopt community emissions reduction programs by Oct. 1, 2019.

The South Coast Air Quality Management District (SCAQMD) has announced plans for a quarter-cent sales tax increase in the region. The agency plans to bring a proposal to voters as a ballot measure. According to agency staff, the reductions called for in the Air Quality Management Plan (AQMP) amount to $1 billion annually, and the additional tax revenue is needed by the district to “… facilitate the significant reduction of air pollution in the South Coast region…” The tax increase is expected to generate $700 million annually in revenue for the district. As a first step, SCAQMD commissioned a study conducted among registered voters. The study found that 54% of those surveyed favored a local sales tax to fund the agency’s programs, but only 3 out of 10 survey participants reported being familiar with the agency. The issue will be considered by the full SCAQMD board at a future meeting. The US Environmental Protection Agency (EPA) is under a court order to complete a “Risk and Technology Review” (RTR) for 33 source categories. The Clean Air Act requires EPA to promulgate maximum achievable control technology (MACT) standards and to conduct a review to evaluate the risks remaining after MACT has been implemented. EPA is required to revise the MACT standards, taking into account developments in practices, processes and control technologies. The EPA has updated several aspects of the risk assessment methodologies. The schedules for some of the categories where UV/EB/LED technology can potentially play a role are shown in the table. 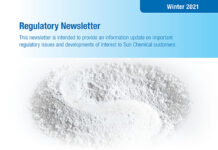