By M. Lecompère and X. Allonas, Laboratory of Macromolecular Photochemistry and Engineering, University of Haute Alsace; and D. Maréchal and A. Criqui, Mäder Research

Dual-cure initiating systems have emerged as promising alternatives to perform fast and on-demand curing of thick polymers. In this paper, a system based on pyrylium salt as photoinitiator and a hydroperoxide or a vinyl ether as coinitiator is reported to be efficient in the polymerization of epoxide resins. The chemical mechanisms involved are studied by spectroscopic methods. It is found that the interaction between pyrylium salts and coinitiator releases a proton that could initiate the polymerization reaction at room temperature as well as under UV or LED. The combination of both methods allows the polymerization of a thick sample by photoinduced thermal polymerization. With this new, dual initiating system, the photocuring of carbon-fiber reinforced polymers was demonstrated to be possible using a robotized LED at 395 nm. This work opens new opportunities to speed the formation of fiber-reinforced polymer.

Epoxy resins represent an important family of monomers and oligomers widely used in industry. They are particularly interesting for materials exhibiting good mechanical and thermal properties. Fiber-reinforced polymers represent one of the most important current developments using epoxy resin for the manufacture of carbon composites. However, conventional systems based on epoxy resins in this field require long processing times (up to 16 hours) and quite often high temperature for cure (up to 160°C). This represents a severe drawback for productivity, leading to increased lead time, high cost and high energy waste.

Photocuring of epoxy resins is quite fast and requires relatively little energy. However, photocuring is highly efficient as far as light can penetrate the medium. Obviously, in the case of carbon-fiber composite, the light does not penetrate the substrate, and only a surface cure is expected to occur. Although it is quite easy to find a cationic photoinitiator to cure the epoxy resin under UV-blue light, the situation becomes trickier in the depth of an opaque sample.

To overcome this limitation, we tried to develop a new initiating system that can be effective both photochemically and thermally. The surface photopolymerization would release an exotherm, which could thermally decompose the initiator in depth. This so-called photoinduced thermal frontal polymerization would ultimately be able to cure the carbon composite at room temperature – and within a couple of minutes. For this purpose, the photochemical and thermal initiating ability of pyrylium salts was investigated. We irradiated 2,4,6-triphenylpyrylium tetrafluoroborate (TPP+) in a dicycloaliphatic epoxy resin, and the conversion curve was monitored by Real-Time FTIR. The thermal reactivity at room temperature also was studied in the resin and in the presence of hydroperoxides or vinyl ethers as coinitiators. Finally, the dualcure behavior is demonstrated, allowing the fabrication of a 5 mm-thick carbon-fiber composite by irradiation with a robotized LED at 395 nm.

a) Photopolymerization ability of TPP+
Triphenylpyrylium tetrafluoroborate (TPP+, see structure in Figure 1) is known to be a good photosensitizer. It exhibits an absorption band (lowest transition at 405 nm in acetonitrile) that matches quite well both the 365 nm emission of a mercury lamp and the 395 nm emission band of an LED. When using 3 wt% of TPP+ as photoinitiator, the photopolymerization of (3,4-epoxycyclohexane)-methyl-3,4-epoxycyclohexylcarboxylate (EPOX) was found to be quite effective under both LED at 395 nm and filtered Hg lamp at 365 nm (70 mW/cm2). This demonstrates that TPP+ can act as cationic photoinitiator, leading to about 60% of conversion under these experimental conditions.

b) Thermal initiation at room temperature
A 3 wt% of TPP+ in EPOX leads to the formation of a gel in the dark within three to four hours and a glassy polymer in about one day. To speed the thermal curing, two different coinitiators were employed: hydrogen peroxide (HP) and isobutylvinylether (IBVE).

Hydrogen peroxide is able to react with TPP+ according to Scheme 1, leading to the release of a proton. As expected, the proton acts as a reactive species toward EPOX, speeding the curing process. Indeed, a gel time of 15 minutes is observed.

In the case of IBVE, a nucleophilic attack of the 2- and 4- positions of TPP+ occurs, leading to an additional reaction. A reactive carbocation is formed, which could initiate the polymerization of EPOX (Scheme 2). A gel time of 20 minutes is observed in the case of Scheme 2.

Therefore, when using HP or IBVE, a reactive initiating system is formed, allowing the curing of EPOX within 15 to 20 minutes. As can be seen, TPP+ is an effective thermal initiator, provided that a coinitiator is added to speed the reaction.

c) Dual-cure process
As both photopolymerization and thermal polymerization can take place using TPP+, this system is potentially usable to cure fiber-reinforced polymer through a photoinduced thermal frontal polymerization. A mixture of 3 wt% of TPP+ and EPOX was placed in a silicone mold 12 mm in diameter and 20 mm deep and irradiated with UV (700 mW/cm−2) for one minute. The temperature jump due to polymerization reaction was measured simultaneously by thermocouples at the surface and at different depths in the bulk.

Then the light is switched on for 60 seconds, and the temperature profiles are monitored. Figure 2 shows the change in temperature for both systems based on TPP+ (3 wt%), EPOX and coinitiator (either HP at 1 mol% or IVBE at 1.5 wt%). First it can be seen that the surface temperature rises rapidly by virtue of the exotherm of photopolymerization. Secondly, this temperature increase induces a thermal decomposition in depth, and a nice thermal front propagates within the medium. From these curves, a front velocity can be determined to be 21 mm/min for HP and 9 mm/min for IBVE, demonstrating the photoinduced thermal frontal polymerization of EPOX under light.

To avoid a premature gelation of the resin through thermal before irradiation, we used inhibitors. A pot-life of more than one hour can be ensured, leaving enough time for the process.

Six plies of carbon fiber (200g/m2 ) were used for the fabrication of a composite. Infusion of the formulation (3 wt% TPP+, 1.5 wt% IBVE, 1 wt% inhibitor, 94.5 wt% of a modified epoxy resin) was operated under vacuum. The total amount of resin was 34 wt%. After infusion, the preparation was irradiated by an LED emitting at 395 nm (FireJet FJ200, 12 W, from Phoseon) with a maximum irradiance peak at 395 nm (FWHM = 15 nm) and mounted on the arm of a robot (Kuka, Figure 3). Irradiation time was two minutes at full intensity. During the irradiation, the surface temperature increased to 105°C as a consequence of the curing process. After 20 minutes of cooling at room temperature, the composite was removed from the mold and analyzed.

Flexural modulus was measured using three-point bending test (ISO 14125). A mean value of 52.4 GPa was found for the carbon-fiber composite, demonstrating the validity of the process. This new initiating system can be used for either opaque fibers or transparent ones. Figure 4 shows the carbon-fiber composite discussed above and a glass-fiber sample made of 20 plies. In our lab, the maximum thickness obtained using this process for carbon-fiber was 20 mm.

As demonstrated, the dual-cure concept could be considered today as a smart technology for the curing of thick epoxy media. This “cure-ondemand” process opens up new opportunities to improve the manufacturing of carbon-fiber composites within a few minutes. Such systems appear to be promising alternatives to conventional high-temperature processes. 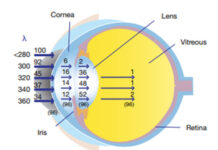 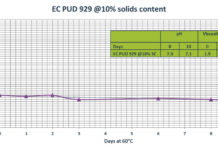 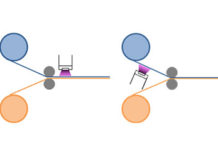