There has been a proliferation of state legislative and regulatory activity involving per- and polyfluoroalkyl substances (PFAS), a class of man-made chemicals used for more than 70 years in a variety of products, such as nonstick cookware, firefighting foam, waterproofing and stain-resistant coatings, and in industrial manufacturing. PFAS in groundwater and drinking water sources have been associated as possible links to negative impacts on human health, including decreased fertility rates, increased risk of certain cancers and impaired immune system function. PFAS used in food packaging have been linked to cancer and organ damage due to migration of the chemicals in the packaging from the wrappers into the food.

Although use of PFAS chemicals in manufacturing has decreased with heightened public awareness of their potential harm and expanding state regulation, PFAS continue to persist in the environment. The US Environmental Protection Agency (EPA) has released a broad and fairly detailed PFAS Management Plan. Potentially affected companies must stay abreast of both pending federal action and rapidly evolving state regulatory and legislative initiatives that follow differing approaches to address risks from a variety of PFAS contaminants. Download the PFAS Management Plan at http://src.bna.com/FBy.

On Jan. 1, 2019, South Korea’s amendment to Registration and Evaluation of Chemical Substances (K-REACH) came into effect. It requires the registration of all existing chemical substances listed on South Korea’s chemical inventory that are manufactured in or imported into South Korea at greater than or equal to one ton per year.

Korea has implemented a phase-in period whereby existing substances that have been “pre-notified” prior to June 30, 2019, will benefit from registration grace periods, similar to the REACH regulation within the European Union (EC 1907/2006). The subsequent registration deadlines are listed in the table below. All new substances must be registered prior to exceeding manufacture or import volumes of 100 kg/year. In addition, any substances designated as Priority Existing Chemicals must be registered prior to manufacture/import.

Nestlé published a “negative list” of packaging materials “for which recycling schemes are unlikely to be established.” The company stated that “[t]hese materials will no longer be used in new product packaging and we will also immediately begin phasing them out from existing packaging.”

The Occupational Safety and Health Administration (OSHA), US Department of Homeland Security and US EPA created and signed the Chemical Facility Security and Safety Working Group Charter. The working group, which includes other federal agency representatives, was established by an executive order in response to several chemical facility catastrophes. The charter reaffirms the group’s commitment to work with stakeholders to address safety and security at chemical facilities and reduce risks associated with hazardous chemicals to workers and communities. For more information, visit https://www.osha.gov/chemicalexecutiveorder/.

UV/EB/LED in Spotlight at SCAQMD

The South Coast Air Quality Management District (SCAQMD) once again is proposing changes to its Marine Coatings Rule (R1106). In 2015, staff proposed a similar rule, which the board scrapped in an 8-2 vote in favor of RadTech’s proposal. While only a sector of our membership is involved in marine coatings, RadTech has followed this regulation closely, as some of the issues raised in this proposal – such as test method – may set a dangerous precedent that can have a negative impact on many other UV/EB/LED market sectors.

In response to requests from RadTech and many members who submitted letters in support of the Association, the current proposal eliminates most of the burdensome record-keeping requirements, raises the exemption threshold from 10 grams per liter to 50 grams per liter and includes an allowance for the RadTech test method ASTM D7767-11. The issue of using the currently approved American Society for Testing and Materials (ASTM) method for UV/EB thin films is a reoccurring one at the SCAQMD, even according to some of its board members. During the rulemaking for Rule 1106 – Marine Coatings, agency staff stated that ASTM D7767-11 would not be an adequate method for compliance purposes, leaving our association to ask the question: If not ASTM D7767-11, then which method would be used by facilities that are applying thin films to prove they are in compliance with the district rules? Staff recently proposed new language for the exemption language, which now reads as follows:

“Exemptions:
The provisions of this rule shall not apply to: (1) Marine or pleasure craft coatings that have a VOC content of 50 g/L or less, or its equivalent, less water and exempt compounds, as applied, provided that for energycurable coatings, product formulation data and test results, determined by ASTM D7767-11, shall first be submitted to the Executive Officer by the manufacturer.”

At a recent meeting of the SCAQMD, board members expressed support for the UV/EB/LED industry. One board member even told the staff that our business should be welcomed with “open arms.” Here are some highlights of the committee meeting:

• Joe Lyou: “We all know that the technology can get us emission reductions, so let’s figure out how to work with them instead of against them and embrace it. … I think we should be welcoming businesses like this with open arms.”

• Judy Mitchell: “We think these kinds of coatings are very good, and we want to encourage them. We don’t want to discourage the development of these or the use of these.”

• Mayor Ben Benoit: “If we can show a product is this much better than everything else, then why are we putting that kind of a requirement on a business?”

The committee hearing (first item on agenda until about 25:33 on the video time ribbon) can be found at:
http://www.aqmd.gov/home/news-events/webcast/live-webcast?ms=Ael1jzWesdk.

The staff presentation at the last working group meeting can be found at http://www.aqmd.gov/docs/defaultsource/rule-book/Proposed-Rules/1106/par1106_wgm_02_presentation_03-12-19.pdf.

The rule adoption hearing was scheduled for early May. Contact rita@radtech.org for additional information.

UV LED Lessons Learned from Others 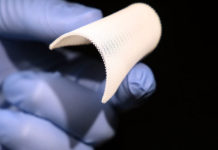 The Science of UV/EB Polymerization