The development and continued evolution of light-emitting diodes (LEDs) represent a significant advance in the lighting industry. In addition to the conventional illumination applications, LEDs have shown to be promising in many new applications, such as the radiation curing industry. In this study, an LED array for curing fiberglass-reinforced panels is designed, as well as an efficient cooling system to maintain constant operation. To evaluate the effectiveness in inducing photopolymerization, intensity and uniformity of the LED irradiance are investigated. Furthermore, this paper demonstrated the optical effect of Plexiglas on the irradiance distribution.

Radiation-induced polymerization has contributed to advancements in sustainable materials and the manufacturing field around the world. Ultraviolet (UV) has been widely used in industrial applications such as inks, coatings, adhesives and sealants. Electron beam (EB) and X-ray processing have been the subject of extensive research in advanced composite, such as automobile and aerospace manufacturing. The primary application of visible light curing process is seen in dental composite restoratives.

Visible light curing of dental materials was introduced in the 1970s1. Since then, a variety of curing units were developed. Quartz-tungsten-halogen (QTH) lamps were first put into clinical practice. QTH has a remarkably low efficiency and a limited lifespan with consecutive degradation of the lamp because of the heat being produced during operation. The argon-ion laser requires less time to achieve equal physical properties as compared to QTH units; meanwhile, the polymerization shrinkage was considered problematic2. It became outdated in a short time due to various reasons, such as the high expense of a typical unit, the inability to replace the source by office personnel and the increased temperature from operation1. Plasma arc lights are pulsed and performed based on multiple 3-s exposures. These units have to be highly filtered, since they generate tremendous amounts of infrared light and ultraviolet1, which may cause biological damage.

The invention of blue LED in the early 1990s represents a significant and practical advance in dentistry, since blue LED has emission matching well with the absorption by camphorquinone, which in combination with an amine, forms the conventional photoinitiator system in dental restorative resins. LEDs are more energy-efficient, lightweight, narrow-banded requiring no filter and have a lifespan of several thousands of hours without a significant intensity loss3. These advantages allow its extensive use in dentistry for the last decade. However, its application in industry has been minimal.

Photopolymerization is initiated by blue LEDs emitting light at 470 nm. To achieve adequate polymerization, light-cured composites rely on sufficient energy. Previous studies4,5 have shown that the degree of polymerization of the resin composite is significantly influenced by the energy density of the light-curing unit. Energy density can be approximated if the irradiance and the time of exposure are known. It should be noted that the amount of energy required to totally cure differs for various resin systems, photoinitiating systems and light sources. In addition, in order to manufacture FRIRPs in large sizes, a uniform irradiance distribution is desired. Thus, this study also investigated the uniformity and distribution of the irradiance of the LED array to evaluate the effectiveness in inducing photopolymerization.

The LED assemblies were purchased from Luxeon Star LEDs (Brantford, Canada). Each assembly includes seven blue (470 nm) LED chips soldered onto a 40 mm round Coolbase. The specifications are shown in Table 1.

Twenty-eight LED assemblies were connected in parallel, mounted to an aluminum heat sink (8 1/8″ x 10 3/8″) with thermal adhesive tapes. The assemblies were oriented such that the distribution of LED chips was the most uniform (Figure 1). A 1/8″-thick piece of Plexiglas protecting the LED panel was supported by four rubber spacers on each corner of the panel (Figure 2). The LED array was driven by two DC power supplies (9.8A, 23.1V; HY3010E-3, MASTECH). The LED array, especially on long exposure at high power, generates a significant amount of heat, which could potentially damage the LEDs. To ensure a longer LED lifetime and better color stability, an efficient heat dissipation system is needed.

UV-V Radiometer Dosimeter (Loctite, Rocky Hill, CT) was used for measurement of light intensity. Readings were recorded at 10 mm intervals in the X and Y direction (Figure 1), in mW/cm2, representing the optical power received across the X-Y plane. The readings then were plotted as an intensity distribution map. To observe and compare the irradiance uniformity across the LED array, the radiometer was placed at three positions: (1) right above the array, (2) 1 1/8″ away from the array and (3) right above 1 1/8″-thick Plexiglas (Figure 3).

The temperature of the radiometer increases due to the radiated light from the LEDs, causing a slight decrease in the reading. To eliminate measurement error, a 10-minute waiting period was adopted after each five minutes of operation, as well as the addition of a cooling fan.

Irradiance distribution of the LED array measured at three positions are displayed in Figure 4a, 5a and 6a. As can be seen in Figure 4a, a number of intensity peaks across the array represent the areas where individual LED assemblies are located, thus showing greater irradiance than the areas between the assemblies. Figure 5a and Figure 6a show much more uniformed irradiance distributions, compared to Figure 4a. This can be attributed to light divergence and scattering. When measured above 1 1/8″-thick Plexiglas, a larger high-intensity area (800-1000 mW/cm2, Figure 5-b) was observed, but only a small area of 800-1,000 mW/cm2 was observed 1 1/8″ away from the array without Plexiglas in between (Figure 6b).

Statistical analysis of the irradiance distribution is shown in Table 2. The highest average irradiance (880.3 mW/cm2) was detected at the shortest distance from the array. The average irradiance was 707.5 mW/cm2 when measured 1 1/8″ away from the LED array without Plexiglas (position 2) and 759.9 mW/cm2 with Plexiglas, representing an increase of 7%. Heat dissipation is an integral part to assure required operation stability and a long lifetime of LEDs. Heat is produced within LED itself when current flows across the junction and becomes considerable when a number of LEDs are packed together. The key factor to optimize heat transfer is the thermal path from the LED junction to ambient temperature. In this design, water cooling efficiently brings down the junction temperature to enable constant operation. In addition to the heat generated by LED itself, heat is given off when light is absorbed by the radiometer. The heat accumulates over time, causing the radiometer reading to drop slightly (Figure 7). A cooling fan was placed at one side of the array, providing a forced convection of air flow to accelerate heat transfer. To maintain a no more than 1% error, the array was turned on for only five minutes after each 10-minute cooling-down period.

It is believed that the perceived irradiance homogeneity largely depends on the distance of the cure surface from the array unless lenses are used. The closer it is, the stronger and less uniform the irradiance is. Figure 4a, Figure 5a and Figure 6a agreed with the prediction. Table 2 shows the Plexiglas enhanced the overall irradiation, especially the central high-intensity area. One possible explanation is that when light travels through Plexiglas, part of it reflected on the four side surfaces. Compared to air as the media, more light is trapped into the Plexiglas, subsequently comes out absorbed by the radiometer. Another explanation is with a higher refractive index of 1.49 than air (1.00), Plexiglas performed as refractive lens, focusing light to the center of the array, resulting in a higher concentration of irradiance.

This study demonstrated the procedure for designing an LED array and its heat dissipation system. Water cooling is essential for constant operation of multiple LEDs. Additional fan cooling is required for measuring irradiance to minimize error, because the radiometer is affected by the heat buildup from light.

The distribution of irradiance is more uniform as the distance increases from the array. Plexiglas placed on the top of the array further uniforms the distribution and enhanced the irradiance. The results are desirable, since Plexiglas will be a part of the mold fixture in future curing process. 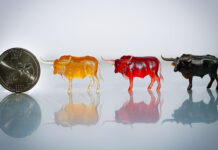 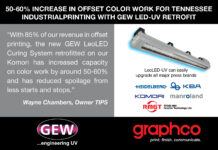