A team led by Uri Banin, Institute of Chemistry chair at Hebrew University of Jerusalem, has been working to develop photoinitiators based on colloidal quantum materials. The research, which was among those selected as tech accelerator winners for RadLaunch 2018, fills a previously unmet need for efficient, water-soluble photoinitiators for coatings, 2D or 3D printing and the biomedical industry.

“Our group introduced a new concept of combining two disparate materials on a single nanoparticle, forming semiconductor-metal hybrid nanoparticles,” explained Nir Waiskopf, a researcher at the university’s Institute of Chemistry and Center for Nanoscience and Nanotechnology. “This discovery, first reported in Science in 2004, has led to the formation of a bustling subfield of research on synthesis, properties and applications of hybrid semiconductor-metal nanoparticles.

“A most intriguing aspect of this family of materials,” Waiskopf continued, “is the synergistic effect where, upon light excitation, these nanomaterials present unique photocatalytic activity. This opened the path for extensive research on the synthesis of hybrid nanoparticles with different compositions, shapes and architectures, and how these parameters affect their photocatalytic functions. These studies have finally matured and are on the verge for commercialization of quantum PIs for various applications.”

Waiskopf, who participated in the RadLaunch Presentations at RadTech 2018 in Chicago last May, said that, in addition to advancing processes in functional coatings and 2D or 3D printing, the technology is useful in addressing the requirements of the 3D biomedical industry in developing scaffold for tissue engineering, capsules for drug delivery, dental implants and for other uses.

“It introduces a novel concept for photoinitiators based on colloidal quantum materials,” Waiskopf said, “which offer unique solutions for a wide range of UV technologies. The quantum photoinitiators provide significant advantages for photocuring applications, as well as for biomedical and environmental applications, such as phototherapy and diagnostics, water purification and green production of alternative fuels from water, using solar energy. This innovative approach is led by our group, which has a strong track record in scientific commercialization.”

As a means of improving over current commercial photoinitiation, Waiskopf explained that the group’s platform technology is based on nanocrystals, “which present intrinsic advantages including: (1) efficient photocatalytic activity; (2) wide and tunable absorption spectra, suitable for emerging LED-based illumination as well as for traditional illumination technologies; (3) enormous single and two-photon light sensitivity in comparison to currently known organic molecules-based photoinitiators; (4) high solubility in various solvents, including water; and (5) high stability, allowing prolonged use and multi-functionality.”

Waiskopf said the team recently demonstrated the use of the colloidal quantum PIs as a new type of photoinitiators for 3D printing in water, a work published jointly with Prof. Shlomo Magdassi in Nano Letters, a journal of the American Chemical Society. “We work extensively on scaling up the synthesis, tailoring specific nanoparticles designed for specific photoinitiator functionalities, identifying new applications and markets, and on engaging with promising partners to promote the technology toward commercialization.”

“In particular, we strongly believe that the quantum PIs represent the next wave of innovative commercial applications for colloidal quantum materials. Our team at the Hebrew University of Jerusalem is set to lead this wave.” 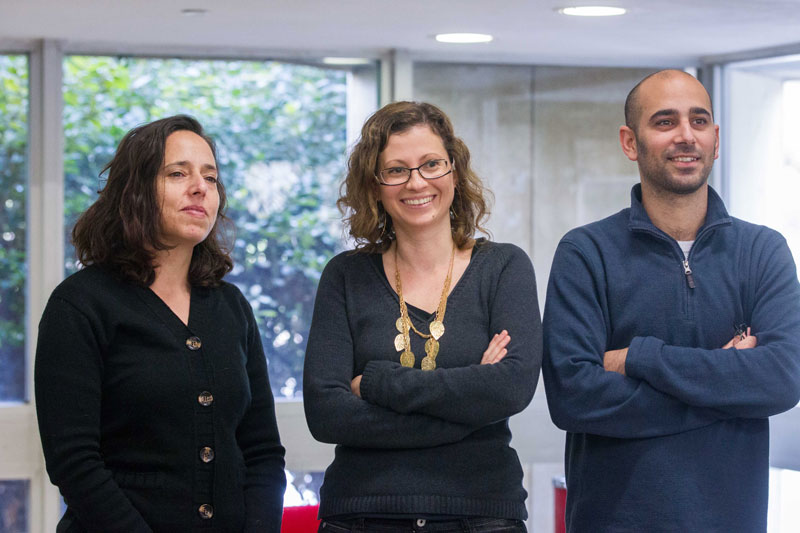 Uri Banin holds the Alfred & Erica Larisch Memorial Chair at the Institute of Chemistry, Hebrew University of Jerusalem. He was the founding director of the university’s Center for Nanoscience and Nanotechnology and founder of Qlight Nanotech – acquired by Merck KGaA in 2015 – which develops quantum nanomaterials for display applications. His research group interests in the field of quantum nanomaterials include the synthesis and characterization of novel semiconductor nanocrystals and their combinations with metals; size-dependent optical and electronic properties of nanocrystals; nanocrystals surface physical chemistry; alternative energy solutions and photocatalysis using nanoparticles; optical devices based on colloidal semiconductor nanostructures, including their use in displays; biological, medical and sensing applications of nanocrystals; and electrical transport studies on nanocrystal arrays and their devices.

Nir Waiskopf (shown in photo at right), a researcher and a team leader in Banin’s group, earned a bachelor’s degree in physics and biology at Hebrew University of Jerusalem as well as a master’s and doctorate in chemistry, developing nano-based systems for diverse biomedical applications such as imaging, sensing, delivery and light-modulation of biological systems. Currently, he leads the effort for development and commercialization of quantum photoinitiators as a platform technology for photocatalysis in general and photocuring applications in particular.

For more information about the Banin Research Group, visit http://chem.ch.huji.ac.il/~nano/index.html.