In this edition of “Professor’s Corner,” a discussion of Intermolecular Attractive Forces is continued. In Part 11, the subject was introduced, and London Dispersion Forces (LDFs) were discussed. These are the forces of attraction exhibited by all atomic, ionic or molecular materials, even those that are completely non-polar.

In this edition, we will look at the attractive forces present in polymers that are polar – those that have a permanent charge separation within the macromolecules. These attractive forces are known as “dipole-dipole attractions.” The negative end of one dipole is attracted to the positive end of another. These attractions can be between polar groups on separate molecules or, in the case of polymers, they can be intramolecular due to the long chains folding back on themselves.

The charge separation in polar molecules is created when atoms bonded together have a significant difference in electronegativity. But the geometric structure of the molecules also is important. A molecule such as carbon tetrachloride, a.k.a., tetrachloromethane (CCl4), has four quite polar C-Cl bonds. But these bonds are oriented in a tetrahedral arrangement around the central carbon atom. This symmetrical geometric pattern results in the cancellation of the charge separation within the molecule. Trichloromethane, on the other hand, is not symmetrical and, thus, exhibits a permanent dipole. Figure 1 displays data for a variety of comparable polar and non-polar molecules to illustrate dipole-dipole attractions. The left-most column shows the dipole moment (µ) of each polar molecule in Debye units (D), a measure of polarity. Note that CCl4 is completely non-polar. Then with each successive replacement of chlorine atoms with hydrogen, the polarity increases, until at CH4 the polarity, once again, drops to zero.

The next three columns in Figure 1 depict the relative strengths of the total intermolecular attractive forces, including both LDFs and dipole-dipole attractions. While individual dipole-dipole attractions often are considered to be stronger than individual LDFs, the data in Figure 1 demonstrate that this is not always the case. Chlorine atoms (atomic number 17) have 17 electrons, are relatively large and, therefore, are polarizable. So, despite the decreasing polarity from CH3Cl > CH2Cl2 > CHCl3 > CCl4, the melting points, boiling points and enthalpies of vaporization all increase! Also, note that for CF4, while each C-F bond significantly is more polar than a C-Cl bond, the smaller fluorine atom is much less polarizable, making CF4 have a significantly lower boiling point and enthalpy of vaporization than CCl4.

As with LDFs in Part 1 of this discussion, the cohesive energy densities (CEDs) of polymers help to illustrate the effects of dipole-dipole attractions in polymeric materials. Figure 3 demonstrates these effects by comparing three non-polar polymers with two that are polar. Poly(vinyl acetate) (PVAc) contains a polar acetate ester group pendent to the backbone, while poly(vinyl chloride) (PVC) has a pendent electronegative chlorine atom.

Dipole-dipole attractions also have noticeable effects on the glass transition temperatures (Tgs) of polymers containing polar functional groups. The first three editions of “Professor’s Corner” in 2020 reviewed this important polymer property4. Figure 4 compares the Tgs of non-polar high-density polyethylene (HDPE) and polypropylene (PP) with those of PVC, poly(vinyl alcohol) (PVOH), polyacrylonitrile (PAN), poly(methyl acrylate) (PMA) and poly(acrylic acid) (PAA). The least polar of these is PMA and this is reflected in relatively low Tg of 10° C. Nevertheless, it still is a higher Tg than that of non-polar HDPE or PP.

PVOH and PAA have functional groups that exhibit particularly strong dipole-dipole attractions; so strong, in fact, that they are classified separately and are known as “hydrogen-bonds” or “H-bonds.” This third type of intermolecular attractive force will be discussed in the next edition of “Professor’s Corner.”

What are your technical questions about polymer science, photopolymerization or other topics concerning the chemistry and technology of UV/EB polymerization? Please submit your questions or comments via e-mail directly to Dianna Brodine, Peterson Media Group, at [email protected]. 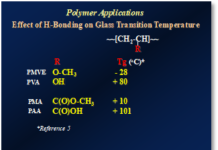