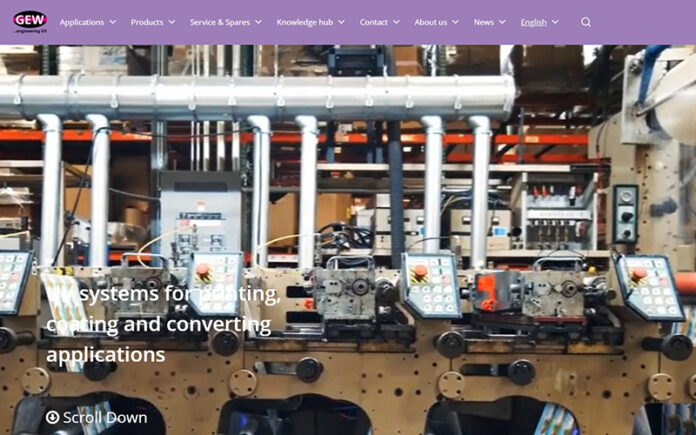 UV curing specialists GEW (EC) Limited, Crawley, UK, is celebrating its 30th anniversary this month. GEW was formed in March 1991 by Gillian and Malcolm Rae with the objective to “provide the narrow web label market with compact and efficient UV curing systems.”

Today, GEW designs and manufactures mercury arc and LED UV curing systems for applications across the printing, coating and converting industries. With headquarters in the UK and subsidiaries in Germany and the US, the company serves an international customer base with sales, service and support available worldwide.

In the early years GEW developed UV systems for a range of label printing machines, and the success of these first models enabled the business to grow rapidly. Between 1992 and 1999 the company repeatedly relocated into larger premises and developed the product range further. GEW quickly became identified with UV curing systems on narrow web printing machines. Sales at that point were mostly direct with original equipment manufacturer (OEM) accounts, based mainly in Europe.

In 1999, GEW was awarded the Queen’s Award for Export Achievement, having doubled export sales in the preceding three years. In the same year GEW established their US subsidiary operation, GEW Inc., in Cleveland, Ohio, to service the Americas. A further subsidiary office in Germany and a worldwide network of distributors and agents completes the group.

2012 saw the company’s latest move, this time to a purpose built, state-of-the-art production facility near London Gatwick in West Sussex, UK. The founders remain involved in running the organization with the same enthusiasm and commitment with which they began in 1991. Adding to this strength, their son and daughter have also taken active, guiding roles within the company.

In more recent years GEW has continued to grow significantly, opening a second production factory in the UK and expanding the product line-up to include world-leading UV LED solutions. Expansion into adjacent UV application areas also has continued, with GEW now a major force in sheet-fed offset, wide web converting and large-scale industrial UV solutions. Even during the recent pandemic, GEW has been recruiting and with the core products more reliable and in higher demand than ever, the future looks bright.

Rae stated that the future of GEW is in many capable hands, supporting its customers and developing innovative new products to maintain its leading position in the industry. Today, GEW equipment is used on many of the world’s most advanced printing machines, and its products are highly regarded for their standard of engineering, reliability and performance. The company’s fast, friendly and flexible approach has kept customers loyal over many years. As testimony to this, its first-ever customer is still buying from the company today.