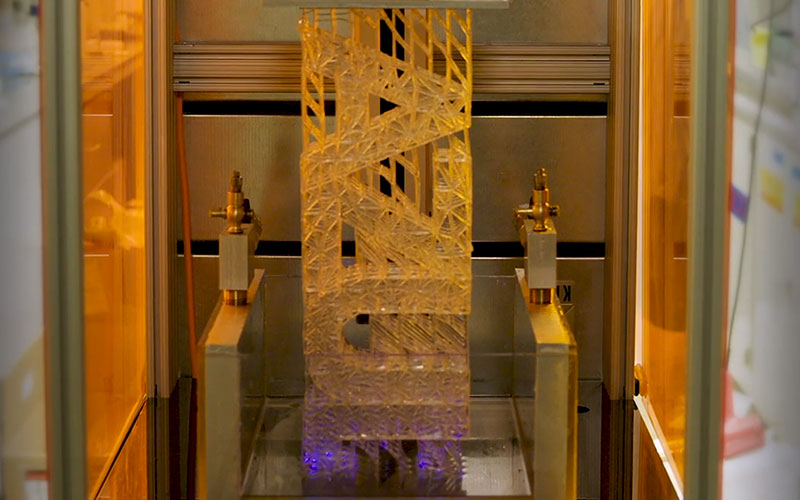 Amid the wide range of 3D printers these days – for everything from chocolate to human skin to bridges to rockets – a promising new technology is coming into view, one that overcomes the limitations of its predecessors, such as materials and applications, size and speed. High Area Rapid Printing (HARP™), pioneered by researchers David Walker and James Hedrick in Professor Chad Mirkin’s laboratory at Northwestern University, is in a promising ascent.

Mirkin, director of the International Institute for Nanotechnology and Rathmann Professor of Chemistry, is an expert in nanoscience. Among his many achievements, Mirkin advanced nanolithography with his development of dip-pen technology and two-dimensional arrays of atomic force microscope tips. He has written more than 760 manuscripts, 1,100 patent applications worldwide (over 350 issued) and is the founder of multiple companies, including AuraSense, Exicure, TERA-print and Azul 3D™.

As researchers in Mirkin’s Evanston, Illinois, laboratory, Walker and Hedrick, a doctoral candidate at the time, were not initially working toward the technology that would become HARP™.

“The tech arose as a combination of my own background knowledge in interfacial physics and fluoro-chemistry,” explained Walker, “along with James’ background in 2D nano-scale printing techniques. We originally combined these two skill sets to develop a 3D nano-printer.”

But in 2015, after learning about Continuous Liquid Interface Production (CLIP) – which builds and solidifies an object in a pool of liquid resin continuously using UV from a projector – Walker and Hedrick recalibrated their mission. “We realized that our techniques for 3D nano-printing might have some advantages if they were scaled up,” said Walker.

And scale it up they did, in an effort that eventually led the pair of researchers to create a start-up company with Professor Mirkin. At Azul 3D™ in Skokie, Illinois, Mirkin serves as chairman of the board, Hedrick is CEO and Walker is the company’s CTO. The start-up has garnered wide interest with its HARP™ technology, including recognition by RadTech International North America.

Azul 3D™ is one of the five key technology developers chosen by RadLaunch (RadTech’s idea accelerator for UV and EB technology) for its Start-up Technology Accelerator Class of 2020. Azul 3D™ and the rest of the 2020 class gave presentations at RadTech 2020 and the co-located IUVA Americas 2020 on March 8-11, 2020, in Orlando, Florida.

Mirkin, Hedrick and Walker’s innovation looks to be a game-changer for 3D printing. The original High Area Rapid Printing (HARP™) -enabled printer is a giant at 13 feet tall with a 2.5 square-foot print bed. The scaled-up size is matched by an equally astounding increase in speed: HARP™ prints at about 1 1/2 feet per hour. The team has demonstrated continuous vertical print output of more than 430 mm per hour, processing a volume of up to 100 liters.

HARP™ is bottom up stereolithography, using high-resolution continuous UV irradiation and light patterning in the form of customized, proprietary DLP optics to build objects. “The light patterning sets the shape of the liquid resin,” Walker explained. “Various forms of post-curing can be used to complete the reaction to ensure safety to the end consumer.”

Walker described how the Azul 3D™ team incorporated a buffer of fluorinated oil to eliminate the usual repetitive step of separating objects that have adhered to the print plane and also to address the problem of UV-initiated heat generation. “The moving fluorinated oil creates a ‘slip-boundary’ that makes the adhesive forces very small between the oil layer and the emerging solid part,” said Walker. “Consequently, we can print the part in a continuous manner as opposed to a laminated part. At the same time, the oil also carries away all the heat,” he said, “by being routed through a cooling system.”

Generated heat, said Walker, “is not a large issue until you begin to print faster and over larger build areas, since the rate of heat production is proportional to volumetric throughput.” In fast printing, generated heat can damage the 3D printers themselves, and frequently can cause damage to solid membranes and interfaces. Thanks to HARP’s™ fluorinated oil, there is nothing to damage. “With the use of a liquid that is stable at incredibly high temperatures,” he said, “there’s really not much that we have to worry about in terms of damage to our printer hardware.”

“Our vision therefore became more focused on the printed part getting damaged or deformed by heat, and trying to avoid this,” Walker continued. Firsthand experience with the effects of heat made this clear for the researcher. “When I observed our first parts smoking with the earliest embodiments of our technology, I knew heat mitigation and dissipation would be key.

“It is such an issue that new printers coming onto the market are beginning to integrate IR thermal imaging of the emerging object,” he said. With the flowing oil technique, Walker explained, “HARP™ offers the first way to mitigate and control this issue while maintaining rapid print speeds.”

In the materials that can be used and the objects that can be built, HARP™ once again shows great promise. “HARP™ can operate without the need of any oxygen present because it does not rely upon an oxygen ‘dead-layer,’” Walker said. “This is what enables us to use a broader range of oxygen-insensitive chemistries.”

HARP™ can handle all light-driven resins, including those with flexible and rubber-like characteristics, as well as high-temperature ceramics and machinable compounds. And, the technology can build one very large object or multiple, disparate objects. “We can print a large array of nonidentical objects at the same time,” Walker explained. “Mass customization is one of the key boons of 3D printing for manufacturing.

“The key limiting factor here is software for designing customized objects in a high throughput manner,” he continued, “but we are working on this. Right now, an object takes longer to design than to print. I believe AI and machine learning will drastically change this in the coming years.”

From technology development to commercial capitalization

When asked to pinpoint the biggest challenge the researchers faced during their development of HARP™, Walker pivoted to a topic that is daunting to many an entrepreneur. “James and I are both researchers at heart – developing the tech was a fun venture,” he said. “The largest challenge has been in developing a company around the technology. Designing promising technology is only the first step of that journey.

“When you are working at a lab bench, it is not entirely clear how private industry might best make use of any technology,” he continued. “We have spent the last two years honing our business plan and approach, and proving out just how enabling this technology can be. It’s exciting because the more we learn about the field, the more we realize the power of what we’ve been able to develop.”

On the journey from the laboratory to industry, the founders of Azul 3D™ have capitalized on an association with RadTech, as Walker detailed. “Since exiting stealth mode, our company has had a presence at the RadTech/NIST PAM 2019 Workshop in Boulder, Colorado, and at the 2019 RadTech Fall Meeting in Dearborn, Michigan,” he said. “We found these meetings and the connections made during them to be immensely helpful.

“The RadLaunch award allows us to be active members within the community while we are in a pre-revenue state,” he continued. “We are excited to introduce this technology to the field and to help push the photopolymer additive manufacturing community forward.”

Azul 3D™ is making strides toward commercializing the HARP™ technology. “We are finalizing a few key beta users and expect to be launching a product at the end of next year,” said Walker. The company is poised to announce some early adopters in 2020. “Importantly, these early adopters are all targeting the long-term manufacture of goods,” stated Walker, “and not just short-run productions with 3D printing as a novelty.”

The manufacturers that are set to implement HARP™ are varied. “Some of them are producing fun and flashy luxury goods, as the field has come to expect,” said Walker, “but others are less obvious and are in more commonplace products where you might not expect a 3D-printed part.” This fits in with Walker’s articulated goal for HARP™: “We don’t want to see 3D printing as a unique novelty in the manufacturing space, but rather a new tool that becomes ingrained within the manufacturing supply chain.” 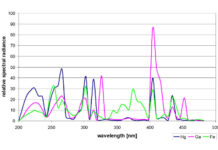